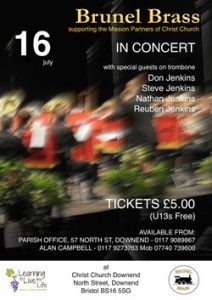 We are delighted to announce that Christ Church will be hosting a charity concert by Brunel Brass at 7pm on 16th July 2016. The money raised will go towards Christ Church’s mission partners. Also performing with the band will be guest appearances from Don Jenkins, Steve Jenkins and our very own Nathan and Reuben Jenkins who together will perform quartet on trombones.

Brunel Brass was formed in December 2006, when the tutors and older members of the newly formed Great Western Youth Band (GWYB) wanted to establish an adult band that could perform concerts, and compete in competitions against other brass bands, aiding the development of young players from the GWYB. Brunel Brass is based in Swindon, Wiltshire and practises once a week on a Thursday evening under the Musical Direction of John Winterflood ARCM LGSM.

The Band’s aim of developing young players is still being fulfilled, currently 14 players under the age of 21, and of those, 6 under the age of 16, will be playing at the National Championships in September. As a result of promotion this year, Brunel Brass will once again be playing in the Championship section, the top division of British Banding in 2017.