The Downend & Bromley Heath in Bloom team have organised a big poppy display in Downend as we mark the 100th Anniversary of the end of WW1. Local groups, including schools and clubs have painted 600 poppies and in the Church grounds there are 173 special poppies which are named with those from Downend who were killed in WW1. 164 of these names are listed on a plaque above the door at Christ Church and they are repeated with an additional nine names on the War Memorial at Page Park. We think the additional names mentioned at Page Park were men lost from Soundwell, which was part of the Parish at the time of making the War Memorial. 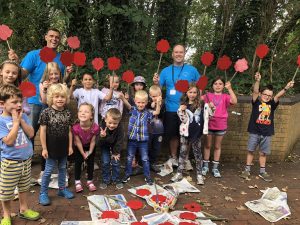 Pictured are the Sunday Connected groups at Christ Church Downend, painting their poppies. Over the Remembrance weekend there will be the two minutes silence as part of the 10.30am service at Christ Church. There is also a special service called “Remembering with Thanksgiving” at 6.30pm when families are given the opportunity to remember loved ones who have been lost either this year or in previous years.